The ninth of ten children, Dave Frisch followed in the footsteps of his father Samuel Frisch, who in 1905 opened the Frisch Café in Cincinnati, Ohio. In 1915, Samuel opened Frisch’s Stag Lunch in Norwood, a suburb of Cincinnati. Dave withdrew from school as a teenager to work full-time in his father’s restaurant. He eventually returned to high school, but before he graduated, his father passed away, leaving Dave and his brothers to run the restaurant.

In the 1930s, Dave went out on his own, and by 1939, he opened the Mainliner restaurant; Cincinnati’s first year-round drive-in named after the first tri-motor passenger airplane. Today, some 78 years later, a replica of the airplane still adorns the restaurant’s sign.

Then in 1946, at an industry convention in California, Dave met Bob Wian who introduced him to a double-decker hamburger called the “Big Boy.” Dave secured permission to adopt the concept but personalized the Big Boy by dressing it with a specially formulated tartar sauce unique to Frisch’s. The Big Boy became an instant hit at Frisch’s first restaurant in Cincinnati – a “drive-in” with room for eight customers inside and sixty cars outside. 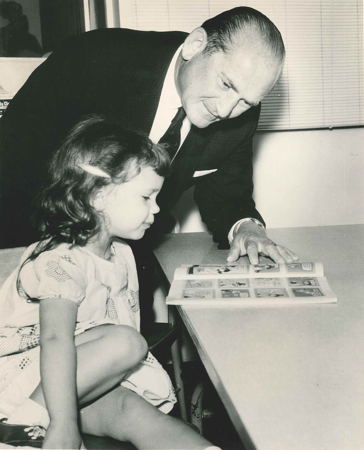 A post-war generation flocked to the restaurant in cars, as eager to gather as they were to eat. Dave Frisch planned for growth by expanding the company’s footprint and its commissary operations, which allowed Frisch’s to operate as an affordable dining option for generations of families.

Over the next three decades the Big Boy concept grew steadily throughout the Midwest and the South. Dave Frisch and his management team continued to innovate and lead the industry in areas of menu innovation, personnel development and advertising. By 1960, the company issued stock to fuel continued growth in ancillary service sectors such as hotels.

With his striped overalls and reddish-blond hair, the Big Boy character, also known as the East Coast Big Boy, remains a constant at Frisch’s Big Boy restaurants. To this day, the friendly-faced statue continues to greet guests at the front entrance of Frisch’s with a huge smile while holding a delicious Big Boy double-decker hamburger.

Under Dave Frisch’s leadership, the company grew to 200 units; all the while staying true to Dave’s vision of offering the best quality food in a clean, pleasant atmosphere, served by friendly, efficient personnel while remaining a profitable company. Despite all his successes, Dave continued to bus tables during the lunch hour at one of his restaurants to stay close to his customers. When he passed away in 1970, Dave Frisch left behind a beloved legacy and a company with $30 million in annual sales.

Today, Frisch’s is a modern brand with food and decor that appeals to multiple generations. It’s a special place that never ceases to delight new and returning customers — many who have fond memories of Frisch’s through the years and others who are making fond memories today.

Frisch’s Big Boy: A Louisville Memoir By Rick Mattingly
Originally appeared in The Louisville Courier-Journal November 11, 1994. Reprinted with permission of the author.

…For older teens who could drive, Frisch’s was the place to cruise. They could show off their wheels and meet up with their friends, and there was always the promise (usually unfulfilled) of meeting someone new of the opposite sex. You could park under the wavy, corrugated awnings and actually order food. Each parking space had its own mounted menu and intercom, a waitress would deliver food right to your car…

…But however much Frisch’s may have been a place where teens could be teens, it was also a place where we could start to feel like the adults we were about to become. The waitresses treated us like adults, calling us “sir” and “ma’am” and coming by mid-meal to ask if everything was okay. We didn’t have to pay for the food until we had finished eating, and we learned to leave the tip before we left the table. We were each given a menu, a set of stainless steel utensils and a glass (not a plastic cup) of water. The food was served on real dishes and was hot from having just been cooked which is very different from food that has been kept warm under a light..

Over the years, Frisch’s Big Boy, also known as the East Coast Big Boy, has greeted guests with his happy smile and our signature Big Boy hamburger. Read more about this brand icon here.

BIG BOY THROUGH THE YEARS 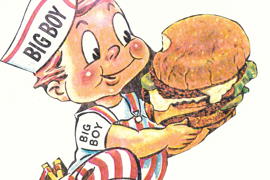 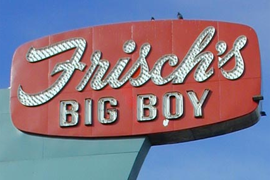 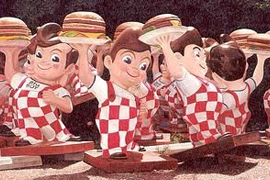 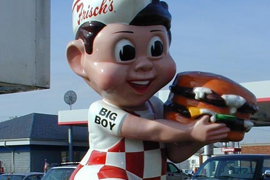 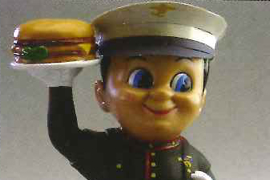 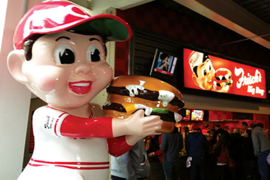 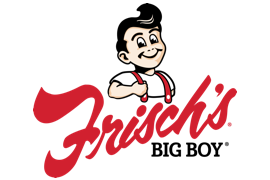 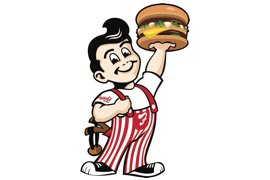 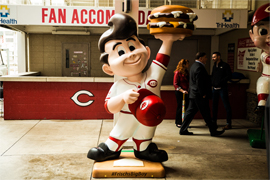 Big Boy has had a storied career—some would even call him an icon. He inspires art. He brings families together for photographs. He always maintains a positive attitude (actually, come to think of it, no one has ever seen a frown on his face). There have been many worthy tributes to Big Boy over the years, and we’d like to share a few of them here with you, in the Hall of Big Boy.